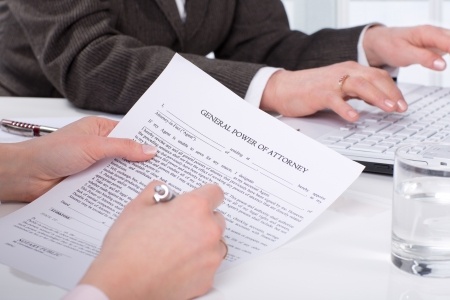 Dealing with probate litigation and administration, we frequently observe how poor estate planning and/or unscrupulous family members destroy the intentions of a decedent and ultimately cause fall out among the remaining family members.  One tool we commonly see abused in Florida is the power of attorney document.  This article is meant to provide a brief overview of the power of attorney document and the statutory mechanisms by which an injured beneficiary or estate may bring a cause of action to recover from unlawful deeds.

Let’s use an example to illustrate the point.  John Smith has two children: Jack and Jill.  Jill takes care of John, and Jack lives out of state.  To facilitate John’s care as he gets older, Jill obtains a power of attorney and conducts John’s financial affairs, including paying bills and managing investments and property.  John passes away and leaves a will devising everything in his estate to his two children Jack and Jill in equal shares.  Jill has used all her father’s assets and the estate has no assets.  Jack does not believe this could happen and wishes to hold his sister, as the power of attorney, responsible for all the actions taken in her role as a power of attorney.

What is a Power of Attorney?

In basic terms, this is a document that enables someone to delegate important decisions regarding financial affairs and medical decisions. In Florida, the document becomes operational as soon as it is effectuated.  The grantor of the power is called the “Principal,” and the recipient who is charged with the task of carrying out the affairs is called the “agent.”  In a perfect world, the document allows the person delegated by the power of attorney document (called an attorney-in-fact) to carry out the affairs of the designator so their financial affairs and other affairs can continue.  When used properly, these documents provide an excellent source of management and ease of life for those dealing with incapacity issues or major medical events.

This article is not meant to provide a guide on the creation or execution of these documents; for more info, see our website section on power of attorney.  Instead, today we will focus on the dark side of power of attorney documents: the abuse of the power of attorney and what the injured parties can do in Florida to hold the wrongdoers accountable.

The State of Florida provides a statutory Scheme laying forth some of the requirements for an “agent” meaning the person who accepts the responsibility under a power of attorney to act on behalf of someone else.   The rights and responsibilities and some drafting requirements are contained in Florida Statute, chapter 709.  We will discuss some of those provisions here.  For your convenience, we have reproduced the full text of the statutes at the end of this article.

Fla. Stat. 709.2114 provides that an agent is a fiduciary and therefore must always act for the benefit of the grantor, in accordance with the expectations of the grantor. Further, this provision requires that records be maintained of all receipts, disbursements and transactions made on behalf of the principle.   These are two very important requirements.  We often encounter family members who believe that the designated agent of a decedent took money for themselves to the detriment of the estate or other beneficiaries under an estate plan. This provision provides that under Florida Law, an agent who personally takes the principal’s assets and does not use them solely for the principal’s benefit (i.e. takes it for him or herself) has breached a fiduciary obligation.  Additionally, the agent must keep an accurate record of all transactions made.  Consequently, if indeed an agent has stolen money from an account, Florida law empowers a challenger to obtain an accounting of the records and importantly, they were required to have been kept for every transaction made.

The second important statutory provision is Fla. Stat. 709.2117, which provides that an agent, if found to have wrongfully taken money from a principal, is required to pay the value of the property that would have been had if the violation didn’t exist.  Further, as identified in 709.2116(3), in addition to the actual return of the money, a successful litigant who establishes that a conflict of interest had actually occurred or more precisely that a breach of the fiduciary obligation occurred will also be entitled to the recovery of attorney’s fees and costs of litigation.

Another important concept in power of attorney litigation in Florida deals with a shifting of the burden of proof.  Per Florida Statute 709.2116, if a transfer of assets is shown in a judicial proceeding to be a conflict of interest by virtue of a transfer to an affiliate or to the agent personally, the agent must then prove by clear and convincing evidence that (1) the transfer was solely in the interest of the principal or (2) in good faith in the principal’s best interest, and the conflict of interest was expressly authorized.  This is an important shift from the Plaintiff’s typical burden of proof.  If a Plaintiff can show simply that the transaction was to an agent or an agent’s affiliate, meaning a spouse, sibling, descendant or corporation of the agent, then the agent must prove that it was valid or be subject to repaying the amount taken along with attorney’s fees and costs.

Whatever your situation, know that abuse of the power of attorney is fraud.  Sadly this is one of the most common forms of elder abuse and fraud we encounter in Florida.  If you suspect that someone you know has been taken advantage of and the perpetrator used a power of attorney to make unauthorized transactions, give us a call and learn more about your rights under Florida Law.

(1) An agent is a fiduciary. Notwithstanding the provisions in the power of attorney, an agent who has accepted appointment:

(a) Must act only within the scope of authority granted in the power of attorney. In exercising that authority, the agent:

May not act contrary to the principal’s reasonable expectations actually known by the agent;

Must act in good faith;

May not act in a manner that is contrary to the principal’s best interest, except as provided in paragraph (2)(d) and s. 709.2202; and

Must attempt to preserve the principal’s estate plan, to the extent actually known by the agent, if preserving the plan is consistent with the principal’s best interest based on all relevant factors, including:

The value and nature of the principal’s property;

The principal’s foreseeable obligations and need for maintenance;

Eligibility for a benefit, a program, or assistance under a statute or rule; and

The principal’s personal history of making or joining in making gifts;

(b) May not delegate authority to a third person except as authorized under s. 518.112 or this part or by executing a power of attorney on a form prescribed by a government or governmental subdivision, agency, or instrumentality for a governmental purpose;

(c) Must keep a record of all receipts, disbursements, and transactions made on behalf of the principal; and

(d) Must create and maintain an accurate inventory each time the agent accesses the principal’s safe-deposit box, if the power of attorney authorizes the agent to access the box.

(2) Except as otherwise provided in the power of attorney, an agent who has accepted appointment shall:

(a) Act loyally for the sole benefit of the principal;

(b) Act so as not to create a conflict of interest that impairs the agent’s ability to act impartially in the principal’s best interest;

(c) Act with the care, competence, and diligence ordinarily exercised by agents in similar circumstances; and

(d) Cooperate with a person who has authority to make health care decisions for the principal in order to carry out the principal’s reasonable expectations to the extent actually known by the agent and, otherwise, act in the principal’s best interest.

(3) An agent who acts in good faith is not liable to any beneficiary of the principal’s estate plan for failure to preserve the plan.

(5) Absent a breach of duty to the principal, an agent is not liable if the value of the principal’s property declines.

An agent who violates this part is liable to the principal or the principal’s successors in interest for the amount required to:

(1) Restore the value of the principal’s property to what it would have been had the violation not occurred; and

(1) A court may construe or enforce a power of attorney, review the agent’s conduct, terminate the agent’s authority, remove the agent, and grant other appropriate relief.

(2) The following persons may petition the court:

(a) The principal or the agent, including any nominated successor agent.

(e) A governmental agency having regulatory authority to protect the welfare of the principal.

(f) A person asked to honor the power of attorney.

(3) In any proceeding commenced by filing a petition under this section, including, but not limited to, the unreasonable refusal of a third person to allow an agent to act pursuant to the power of attorney, and in challenges to the proper exercise of authority by the agent, the court shall award reasonable attorney fees and costs as in chancery actions.

(a) Solely in the interest of the principal; or

(b) In good faith in the principal’s best interest, and the conflict of interest was expressly authorized in the power of attorney.

(a) A provision authorizing an agent to engage in a transaction affected by a conflict of interest which is inserted into a power of attorney as the result of the abuse of a fiduciary or confidential relationship with the principal by the agent or the agent’s affiliate is invalid.

(b) Affiliates of an agent include:

The agent’s descendants, siblings, parents, or their spouses;

A corporation or other entity in which the agent, or a person who owns a significant interest in the agent, has an interest that might affect the agent’s best judgment;

A person or entity that owns a significant interest in the agent; or

The agent acting in a fiduciary capacity for someone other than the principal.

What is Probate Court?

Florida Probate Basics: Should You Object to a Petition for Administration?